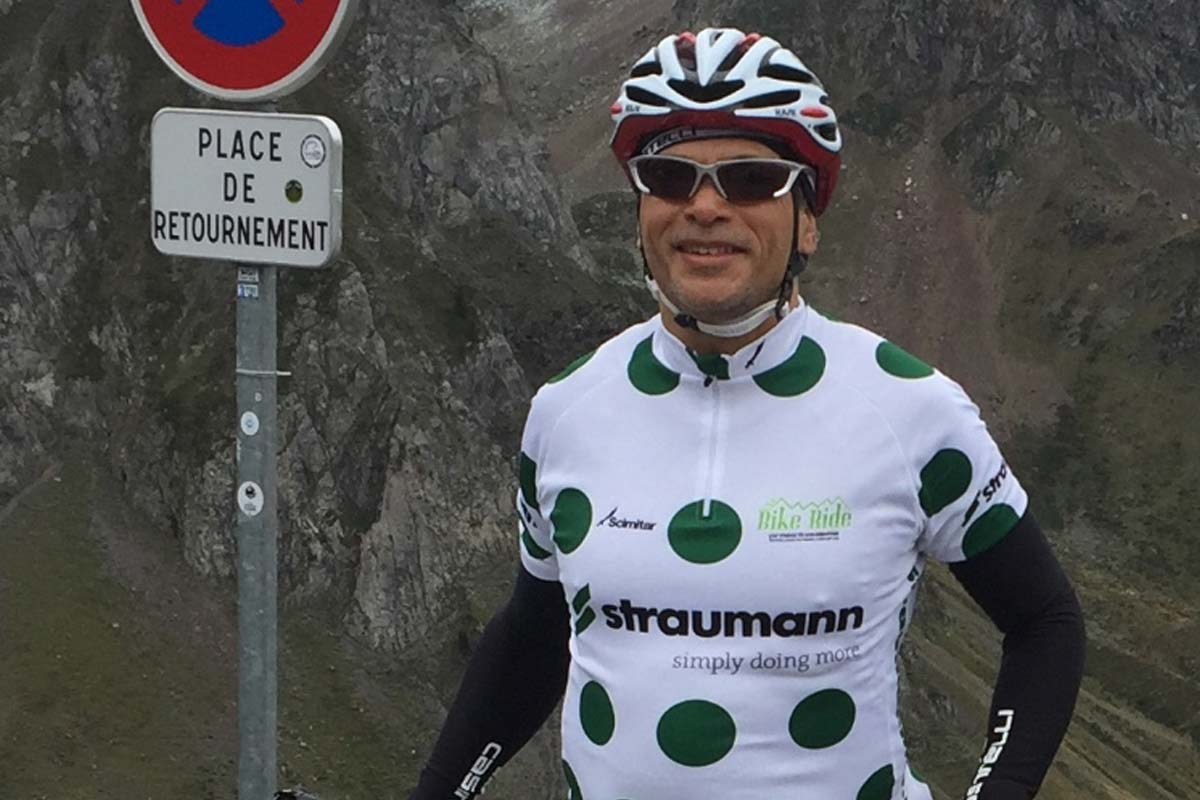 One of our implant surgeons Mark, whose passion for cycling almost cost him his life, is back in the saddle to square up to the Pyrenees in a 450-mile ride to raise money for dental charity, Bridge2Aid.

In May, Mark Vardon-Odonkor, an implant surgeon at Bow Lane Dental, was in a collision with a double-parked car on an 11% decline while training in Bath and lost consciousness, suffering a severe head injury.

Mark, who is also a dual specialist in prosthodontics and oral surgery, explains: ‘I sustained lacerations to my right cheek and ear and a head injury. Unfortunately, I had a subdural haematoma – a serious condition where blood collects between the skull and the surface of the brain – which was missed by doctors in the UK and picked up almost two months after the accident by doctors in Ghana. It was drained in an emergency procedure and I began to improve after surgery.’

Advised not to train until only last month, Mark will be joining others cyclists from the world of dentistry to cycle across northern Spain from Cap D’Agde to San Sebastian in just five days in an event organised by implant specialists, Straumann.

Mark says: ‘I was unable to any training for almost three months after the accident and what is notable is that, 10 weeks ago, I was on an intensive care unit.

‘I resumed training in early August, with short rides and then built up to longer distances. Having been a patient in a hospital in third world country, I have had an insight into how far patients have to travel to gain access to modern healthcare; often this is hundreds of miles.’

The charity cycle ride starts at Cap D’Agde on the Mediterranean coast and crosses the Pyrenees mountains to San Sebastian on the Atlantic. It will take five days, cover 462 miles (744km) and means an arduous 34,000-plus ft (10,4000m) of climbs.

The event is in aid of Bridge2Aid that trains local healthcare clinicians to treat dental disease from a clinic in Tanzania. It is done in a sustainable manner and leaves them with the skills to provide safe care in the long term to a community that would otherwise have no access.

Thanking practice founder James Goolnik for his support, Mark jokes: ‘Bow Lane is the probably as close to Team Sky in ethos as you'll find in the dental world.’

You can contribute to his fundraising effort by visiting his JustGiving page.